Meet the brewers and Beinn Udlamain 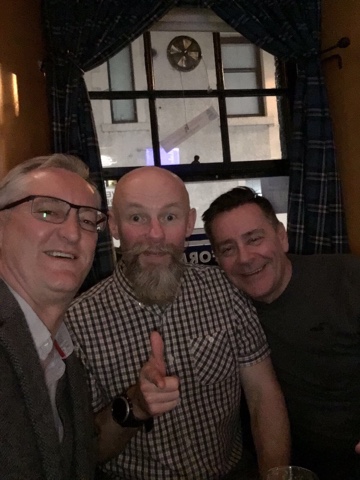 Gary had got us tickets for a meet the brewers night at linlithgow cricket club months ago for me and him and ali had got himself one to join us , which is great the only down side was it was my last weekend at home before going back to work and bob was only available on the Sunday for skiing , That was the morning after the meet the brewers night ! I couldn't miss this opportunity to get out in the hills but also was wanting to have a good night out with gary and Ali at the meet the brewers so I done both , the secret was to make sure I had everything packed and ready to go for bob picking me up at 06:30 in the morning , which I done I even laid out my breakfast and coffee travel mug for the car
Gary knew one of the brewers for this new brewing company from grangemouth called hybrid brewers ,his name is rab lee and he is an interesting bloke we all had lots to talk about the beer samples were excellent the venue was full and the talk was good , It finished around 21:30 and we walked from the cricket club into town for a beer or two at platform 3 before the train home , unfortunately Ali had a bit of a cold so he wasn't his self and for a first time ever borrowed my extra layer and scarf as he was feeling a chill ( thats normally me ) he went straight home off the train , but me and gary decide to have one more for the ditch as they say ! at the centre of the universe AKA the black bull bar , what is it about beer that makes you think you are so much stronger than you think ! my alarm was set and my stuff all laid out so all I had to do was go to sleep when i got home , the beer lover in me saying you will be fine with 6 hrs sleep , I had even packed some gaviscon knowing I would be having beers and not  a lot of sleep inevitably means heartburn as soon as i start to exert myself in the morning , with two alarms set i should have been fine but somehow they
had failed me and i woke to bob chapping at my door ! not much time lost though as my clothes were laid out my bags packed and breakfast sorted with coffee in a travel mug for the car and we were off 15mins later than we should be but that was my alarms fault ,
This only being me and bobs second outing with our new skiing gear and no tomas this time we opted to head to drumochter pass again and go for the other two munros along that pass on that side of the road , This saved us worrying too much about the route planning and we knew roughly what we were heading too , this time we parked at lay-by 79 on the A9 the laybys are all numbered which is handy . We packed our skis on our backs and walked under the railway followed a land rover track for about 40mins crossed over a bridge and got our skins on for our first ascent, the weather was good it was sunny with occasional low cloud but for our ascent it was perfect we had to zig zag around a little finding a snow route up to begin with then traverse high enough to avoid a steep gully with a nasty overhang on it , but once up on the ridge the slope was smooth and the incline steady , nearer the summit there was a big cornice on our right hand side and we stayed well away from the edge of it , the top of the mountain was round in shape and the snow was lovely and smooth suddenly out of nowhere a square object at foot level appeared in the snow ahead !  this turned out to be the trig point of our first Munro ! 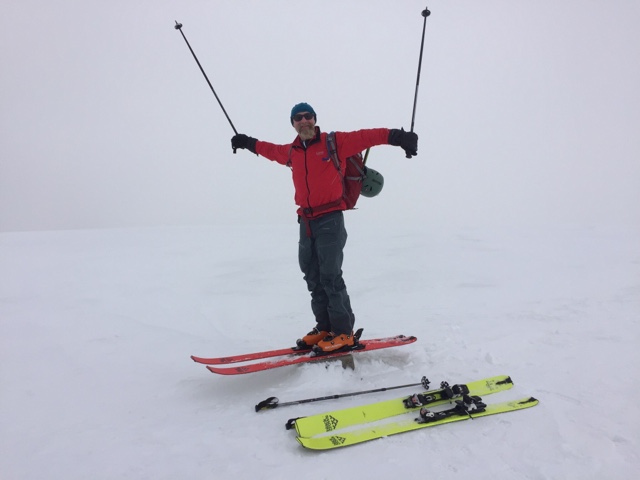 The snow was that deep it nearly buried the trig point ! trig points are mostly a standard size of 4 foot (or in new money) 1,2meters this is a standard trig point so the snow on the top must be just short of 4foot deep and definitely 1meter deep , 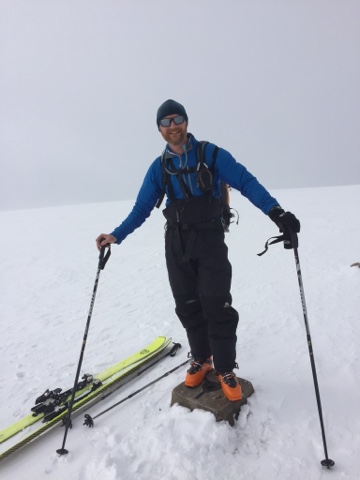 This was made even cooler for myself as I have been following a Scottish ultra runner and back country ski racer called Donnie Campbell who had posted on his twitter page a photo of his skis at this self same trig a few weeks previously , and at the time I was very jealous thinking it was the coolest picture I had seen this year only to end up taking the same photograph myself made me smile from ear to ear 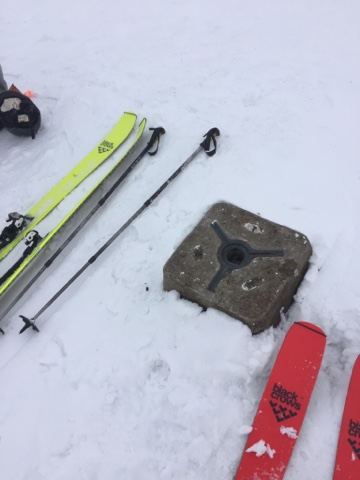 here's some facts on trig points


And here's a photo of the same trig point in summer 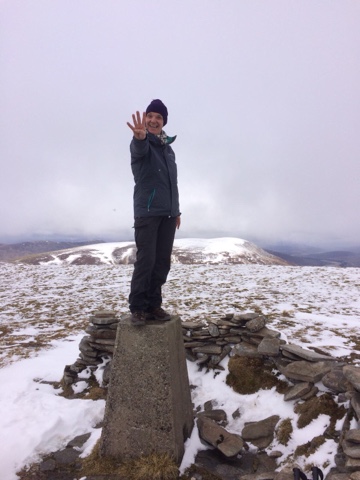 knowing we were at the top because we were stood right on the trig point , we could take our skins of the skis for a bit of downhill action , the visibility was excellent the views fantastic  we had a brief stop for photos took the skins of our skis and got some very short lived pleasant downhill , its a difficult balance of wanting to have fun skiing fast downhill and wanting to practice technique I should priorities technique for now as I have a lot to learn about off piste skiing and may need to relearn some of my skiing habits , but bob just seemed to be going that wee bit fast that I found it hard to keep up even on a steady traverse he just kept pulling away which shouldn't happen as we are the same height and weight roughly , I'm thinking his skis must be quicker as on a traverse when I'm behind him in the tracks he has made I should be able to catch him 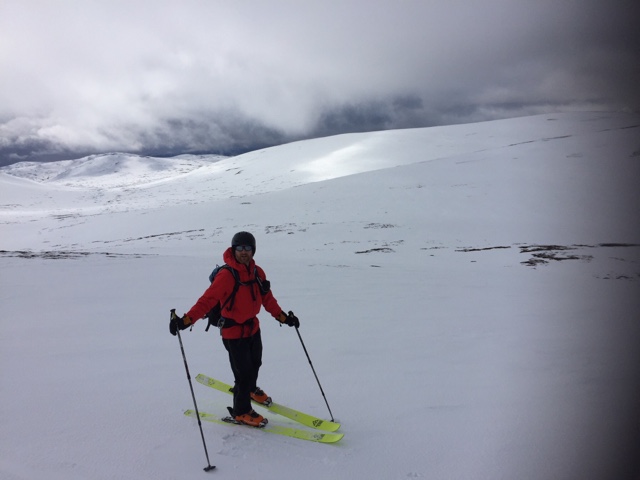 once down at a coll we stopped for some lunch and watched some walkers out coming down from our next targeted munro , I shared my chilli bean soup with bob and he gave me some hot tea bliss ,
then began the steady climb up to our second Munro while watching the slopes around the area we were on /possibly going to go on /or had been on ,we were already planning our descent back out this is called picking your line , Ive watched lots of off piste ski videos about elite skiers picking an impossible line on some far out peak , I would look at these peoples choosing a line down a mountain and think no way thats impossible ! we were looking at our choice of line down in an entirely different way we were looking for pleasant slopes not challenging and longest line out toward the car to cut down on walking time at the end ,
The normal route up the second munro follows a fence line but it was a bit rocky over by the fence posts , so we skirted it on the side of the boulder fields while steadily heading up , once at the top of our second peak , we had a brief discussion after a quick photo about what route to take out ! we could choose to carry right on over the top of this peak and then back down the glen we came up on its opposite side but it looked like that side had less snow we could have taken a direct route out but it looked like we would probably have to do a further bit of skinning to go over gullies that way , so in the end we chose to go back the way we came , 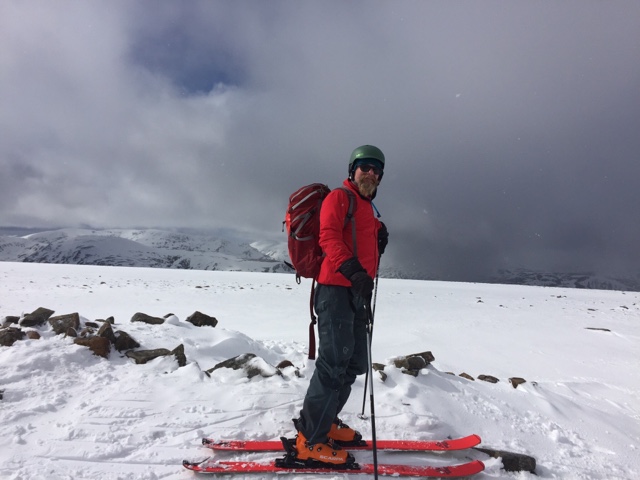 It was a fast pleasant ski back to our lunch spot where we got our skins back on and headed up our earlier ski down route as we approached the top the clag came in, we were in low cloud it was snowing and visibillity came down to virtually zero , bob comes into a league of his own in these conditions the map and compass was out and we went right up to the buried trig point on a compass bearing , this i am ashamed to say is a skill i do not have and would not go out in the mountains at this time of year without knowing it was going to be sunny/clear all day, without somebody I trust to navigate as well as bob can , especially as when we got to the top and were skiing back down as visibility got even worse due to the snow on and under the glasses , I stuck as close to the boulder edge as I could because I was scared of the cornice i had seen on the way up and knew it was over to my right hand side somewhere in the clag , 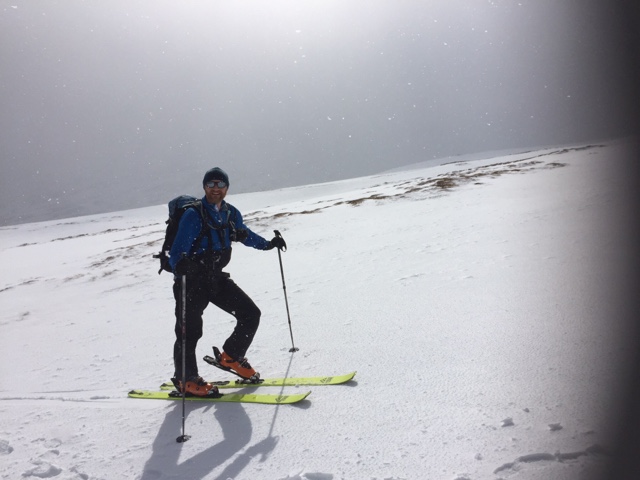 we chose a long traverse keeping as high as we could so we could keep up a decent pace covering a fair distance effortlessly and before we knew it we were in the final stages of our decent picking out snow banks among clumps of heather, it turned out really well with a chance to practice some difficult areas requiring ski skills so it was good practice and a great confidence builder we done well , We virtually skied right down to the bridge we had crossed on the way in , had we known we were coming back the same way we went in then we could have left a pair of trail shoes under the bridge for the march in and out save us a fair walk in our ski boots , while we were marching out with our skis strapped to our back the landrover track we were on went along side the railway forf a bit before it went under the railway , when we were walking this section a traim coming up the line gave us a toot and the driver gave us a big wave which was very nice I wondered what all the passengers on the train would make of us !
some stats for the day six and a half hours start to finish 11.7miles 3700ft of ascent
we got down at 17:00 and I had dinner booked with my mum and her friend lewis and my son cameron as he was emigrating that week to live and work in germany so I just made it in time for dinner and then we met bob in linlithgow after mum and lewis left us

Popular posts from this blog 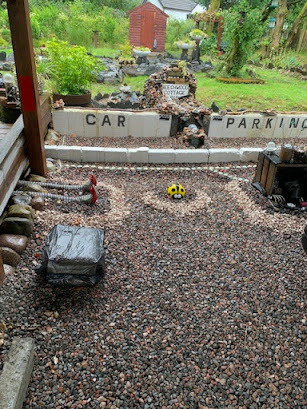 Waking up in a warm bed to a pre-set alarm my breakfast order was in the previous night, I was looking forward to some vegetarian sausage and haggis with beans and eggs, it was wonderful then I got showered clean dry clothes on, wet stuff now all dried out and put into my backpack I was good to go by nine AM.   Having received text messages from Sheila and bob- Sheila to say she was heading home from mull so passing close by if I wanted picked up somewhere, I could then have a couple of dry days at home? Bob to say he and Tim were heading for a few days hiking in the fisherfield hills! Both of which sounded like awesome opportunities I accepted both kind offers,             Leaving the B&B feeling I had plenty time to walk the short distance to the Clachaig where I would be meeting Sheila when she managed to get away from work and drive there, I decided to stop at the glen Coe folk museum which I thoroughly enjoyed, writing and sending her a postcard from it, I actually would h
Read more

Adventure ideas can spring from nowhere